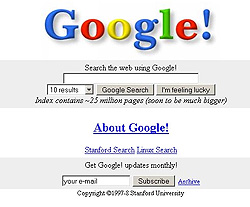 The complaint was filed on November 6 in Marshall, in the Eastern District of Texas -- the U.S. court with a history of decisions that are highly favorable to plaintiffs in patent cases -- but the case only came to light over the weekend.

A spokesman for Mountain View, California-based Google said it believed the suit was without merit.

"While we have not been served, we are aware of the complaint and believe it to be without merit based upon our initial investigation," Google spokesman Jon Murchison said.

The leading Internet company derives 99 percent of its revenue from online advertising, which is delivered in response to keyword searches Google users perform to find Web links.

Michael Belanger, president and co-founder of Jarg, said in a phone interview that his company had become aware of the infringement several years ago, but lacked the resources to press its case until it found a law firm willing to fund the case on a contingency-fee basis. Northeastern then signed on.

The plaintiffs' attorneys are from the Texas-based global law firm of Vinson & Elkins, which is paying the costs of the case, assisted by local counsel in Marshall and nearby Tyler.

The suit alleges that Google has never obtained a legal opinion on whether the company infringes on the '593 patent. It seeks a jury trial and an injunction against further infringement of the search patent, damages, royalty payments.

The case centers on U.S. patent No. 5,694,593, entitled "Distributed Computer Database System and Method," which was invented by Dr. Kenneth Baclawski, an associate professor in Northeastern's computer science department.

Baclawski is co-founder of Waltham, Massachusetts-based Jarg, which was incorporated in 1998. He first published his method of searching and retrieving information from large, distributed databases in 1994, according to court documents.

It is testing its software with a handful of unidentified customers in the life sciences and biomedical fields thorough its subsidiary, Semantics Life Sciences.

The plaintiffs are looking to be paid for their intellectual property, not put Google out of business.

"We are just interested in a normal royalty if the case determines that ... Google is using the technology we developed," Belanger said.