Ultrabook sales are falling short of expectations amid high pricing and lack of effective marketing, according to market research firm IHS iSuppli, which cut its forecast for 2012 sales of the ultra-thin, low-power notebook PCs.

IHS estimates that 10.3 million Ultrabooks will ship this year, down from a previous forecast of 22 million. More than half of 2012 shipments are expected to occur in the fourth quarter, IHS said.

The reduced forecast for Ultrabook sales is a blow to Intel Corp., which conceived of the Ultrabook concept and has pumped millions into marketing the PCs. In April, Intel President and CEO Paul Otellini predicted that Ultrabooks would soon hit "mainstream" price points as low as $699. But even that price point may be too high for widespread adoption amid a flood of other promising mobile computing devices like media tablets. 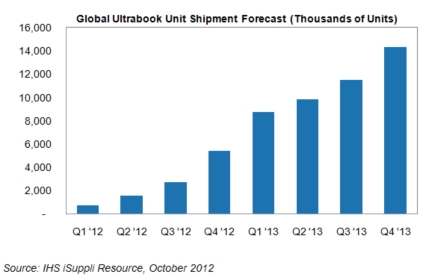 Craig Stice, senior principal analyst for compute platforms at IHS, said in statement that the PC industry has failed to create the kind of buzz and excitement  needed to propel ultrabooks into the mainstream.

"There once was a time when everyone knew the 'Dude you're getting a Dell' slogan. Nowadays no one can remember a tag line for a new PC product, including for any single ultrabook," Stice said.

IHS also reduced its forecast for 2013 Ultrabook shipments. The firm now expects shipments to rise to 44 million next year—more than quadruple the 2012 forecast, but down from an earlier forecast of 61 million.