4% of Western smartphone users use VoIP more than ‘traditional’ voice

Around 1% of smartphone users did not use traditional voice services at all during our two-month study.

Mobile operators are fearful, uncertain and doubtful about the over-the-top (OTT) threat, but have precious little quantitative evidence to base it on. Analysys Mason has recently published the last of four reports analysing the real-world smartphone usage behaviour of more than 1000 consumers in Europe and the USA, using data collected from a passive on-device monitoring app from Arbitron Mobile Trends Panels. The report, Consumer smartphone usage: voice and messaging trends, offers some real-world quantification of the scale of disruptive usage of OTT voice and messaging services. This article focuses specifically on the threat of mobile VoIP.

Of smartphone users in our panel, 20% used a VoIP application at least once during the two-month observation period for this study. As smartphone penetration increases, VoIP apps have the potential to benefit from a network effect and increase their share of voice communications.

Skype continues to dominate the VoIP market, which attests to the power of the network effect. It occupies the role of default VoIP provider; 79% of VoIP users in our panel used Skype (16% of all smartphone users in our panel). We believe that familiarity with concepts in the desktop PC environment also affects smartphone usage. Many mobile VoIP users start using the service because they are familiar with the desktop version.

The chart below shows VoIP app usage as a proportion of total voice app 'face time' (time with either the handset's native dialler or a VoIP application running in the foreground) for the 20% of panellists that were active users of VoIP. The median level of usage for the VoIP users was 8% – that is, half the active users of VoIP apps spent 8% or less of their total call time using VoIP.

Figure 1: Percentage of voice app face time that was due to mobile VoIP [Source: Analysys Mason, 2012] 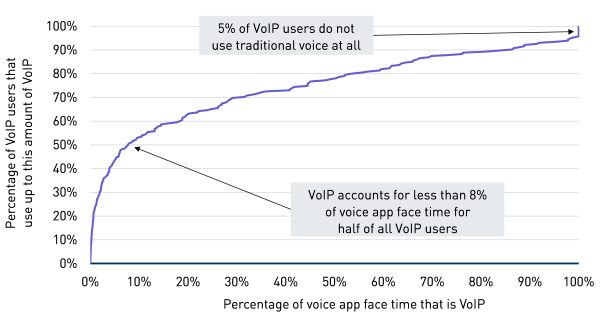 Some smartphone users are beginning to use VoIP apps as their primary voice service: approximately 20% of VoIP users (or 4% of smartphone users overall) used mobile VoIP more than traditional voice services. As more people use VoIP as their primary voice service, then ever larger numbers of individual users' key contacts will be contactable through VoIP apps. The danger for mobile operators is that they become relegated to providing secondary voice services, picking up the 30% or 40% of call traffic generated by users when contacting people who are outside their core calling circle. If this occurs on a widespread basis, their role becomes marginalised.

Around 1% of panellists did not use traditional voice services at all during the observation period.

Mobile operators can mitigate the threat from OTT services by fine-tuning their price structures. Operators control the levers of the pricing structures within which OTT services must operate. If the perceived value of operator-provided communications services and the price of those services are misaligned then customers will be encouraged to churn to alternatives. Getting the right balance between services (voice and messaging) and connectivity (mobile data) is crucial.