The worldwide mobile phone market shrank in the second quarter of this year, with sales falling by 2.3 percent compared to the same quarter a year ago, according to research company Gartner.

The reason for the decline was the "challenging economic environment," Gartner said, as well as phone owners holding out for high-profile device launches later this year such as Apple's iPhone 5.

Gartner warned that Apple's third quarter may be "another weaker than usual" quarter for the company depending on when exactly the iPhone 5 is released. The device is expected to be announced in September and launched a month or two later. 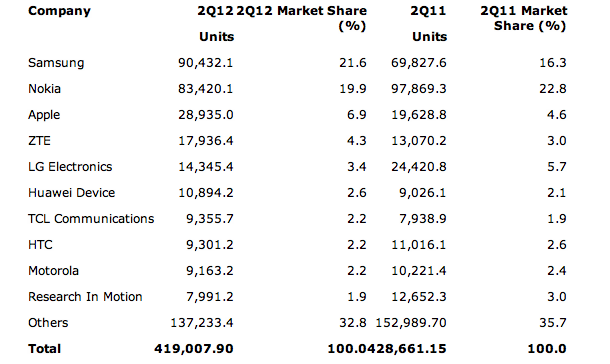 Samsung's growth was aided by strong Galaxy sales -- particularly of its flagship Galaxy S III device, which reached 10 million in the first two months after its release.

Overall global sales of mobile devices reached 419 million units in the quarter, with smartphone sales up by more than 42 percent year-on-year.

Emerging markets such as China and phone makers pushing 3G will "drive the smartphone market upward," Gartner said, while feature phones sales will remain under pressure. Smartphones accounted for around 37 percent of all mobile devices sold in the second quarter of this year.

The research firm has previously said it expects to see 1.9 billion mobile phones sold in the course of 2012.