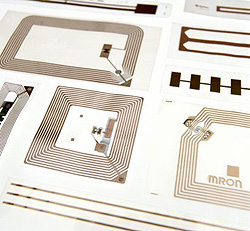 The chips are the first in the world to be mass-produced with a 45-nanometer process, about one-third smaller than current 65-nanometer technology. A nanometer is one-billionth of a meter.

Known by the project name Penryn, the chips hold little in the way of fundamental design advances but are an important step in continuing the industry's track record of delivering chips that get smaller and faster every two years or so.

They use a new kind of transistor - the basic building block of microchips - that Intel unveiled earlier this year in what was hailed as one of the industry's biggest advances in four decades.

Penryn is the "tick" in Intel's "tick-tock" strategy of shrinking an existing chip design to a smaller size, then following up the next year with an all-new blueprint, known as a microarchitecture.

Brookwood said he reckoned the new chips, to be sold under Intel's Xeon and Core 2 brands, would be able to run most software up to 15 percent faster.

The 45 nanometer shift is also important to Intel because it means the company can make more chips from a single platter of silicon, boosting productivity and helping recoup investment on factories, which cost about $3 billion to build.

The company expects to make the majority of its processors on 45 nanometer by the middle of 2008, mirroring the progress of its 65 nanometer products, Kilroy said.

"We feel this tick-tock model is on track and our cadences allow us to ramp pretty fast," Kilroy said.

It cements Intel's manufacturing lead over rival Advanced Micro Devices Inc, which only started making chips on 65 nanometers earlier this year but plans to try to roll out 45 nanometer technology in 2008.

Intel will initially sell a dozen versions of the chips for server computers that power corporate networks, with prices ranging from $177 to $1,279. A version for high-end consumers such as gaming enthusiasts will sell for $999.