Hundreds of German Apple fans braved rain and wind before dawn to be among the first in Europe to get their hands on an iPhone but the arrival of the year's hottest consumer gadget passed most Germans by. 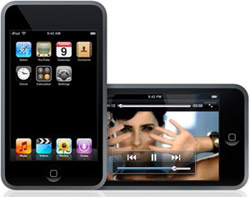 A few hundred people lined up at a Deutsche Telekom shop in Cologne, where T-Mobile let customers buy the music-playing and Web-browsing device at midnight before the phone went on sale across the country later in the day.

Sales staff cheered and applauded when the first dozen customers entered the store in the downtown shopping district of Cologne across from a Vodafone store.

British telecoms group Vodafone lost out to T-Mobile and Telefonica's O2 and France Telecom to sell the iPhone in Europe but will start selling a similar multimedia handset from Samsung Electronics on Friday.

T-Mobile representatives handed out blankets, umbrellas as well as hot tea, coffee and pretzels for those waiting outside.

"All of us are Mac (Apple Macintosh computer) fans," said a man who works in a MP3 store and was waiting with two of his friends. "The iPhone is the best phone in the world," he said.

Deutsche Telekom Chief Executive Rene Obermann has pinned high hopes on the iPhone, which he said will attract new customers in Germany, where the firm faces tough competition.

Europe's biggest telecoms group by sales declined to give a sales expectation and did not say how many phones it had in stock. A T-Mobile spokesman merely said: "We have plenty."

The iPhone melds a phone, Web browser and media player and costs 399 euros ($584). Customers must agree to a two-year contract with T-Mobile for monthly fees between 49 and 89 euros.

Almost all the people lining up to buy the phone were men.

"It's ingeniously simple and simply ingenious," another man added, who said he has been an Apple user since 1984.

Away from the hardcore fans, however, Germans in downtown Frankfurt lived up to their reputation for thrift and resistance to hype.

Outside the T-Mobile store on Frankfurt's main shopping street, people hurried to work without noticing the placards outside the shop proclaiming the iPhone's arrival.

"Really? No, I had no idea," said one woman, declining to stop to give her name, when asked whether she was aware the iPhone went on sale on Friday.

One solitary would-be buyer loitered outside the shop an hour and a half before opening time.

"I'm astonished there's no one else here," said 34-year-old Uwe Berger, a computer programmer who fell in love with the iPhone on a recent visit to the United States.

"I don't find the price too high. The iPhone can do more than other phones and of course it's much better."

When iPhones went on sale on June 29 in the United States, Apple fans endured heat and downpours to queue for days to buy what has been dubbed the "Jesus Phone" by Internet bloggers who see it as the ultimate mobile device.

Apple has since sold over a million iPhones.