Juniper Research estimates that the number of smartphone shipments exceeded 157 million in Q3 this year, with Samsung increasing its lead in terms of unit shipments.

In the third quarter of 2012, the Korean based company shipped a record 56.3 million smartphones, representing almost double the market share of its rival Apple, which sold 26.9 million. Samsung’s flagship device, the Galaxy S3, played a key role, with estimated sales of 18 million in the third quarter.

However, with the festive season still to come, and with a new and refreshed product line, including the iPhone 5, Apple is expected to better its sales in the fourth quarter. 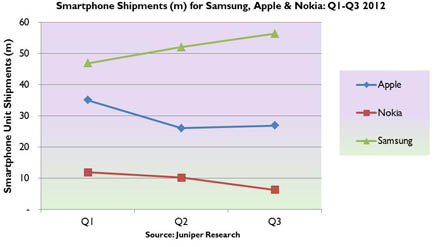 RIM and Nokia Struggle in a Samsung & Apple Dominated World

The Galaxy S3 has been a phenomenal success for Samsung this year, bettering its sales over the previous quarter. Samsung has been highly effective in leveraging its global brand strength and the popularity of the Android OS to drive sales of smartphones in all price tiers.

ZTE shipped almost 20 million smartphones over the first three quarters with third quarter sales exceeding both Nokia and RIM. Nokia’s Windows devices have yet to make a significant impact, with the Finnish company shipping just 6.3 million smart devices in the third quarter – a 63% fall compared to Q3 2011. This was partly due to customers waiting to buy into the new Windows 8 platform due in Q4. RIM’s recent results – which run to a different financial schedule – nevertheless hint at continuing problems for the Canadian firm with just 7.7 million quarterly smartphone shipments. Meanwhile Samsung’s Android competitors including HTC and Motorola continue to fall short.

While other smartphone vendors, including Nokia and RIM, have posted disappointing shipments for the third quarter, LG posted a 24% q-o-q growth with a record 7 million smartphone shipments. While LG has posted a profit for its smartphone business, it is still facing a challenge when competing against the likes of Apple and Samsung. LG needs to better its smartphone line-up and rebuild its position within the second-tier smartphone segment - in order to improve profit margins and effectively to compete against players including Huawei, Motorola and HTC.